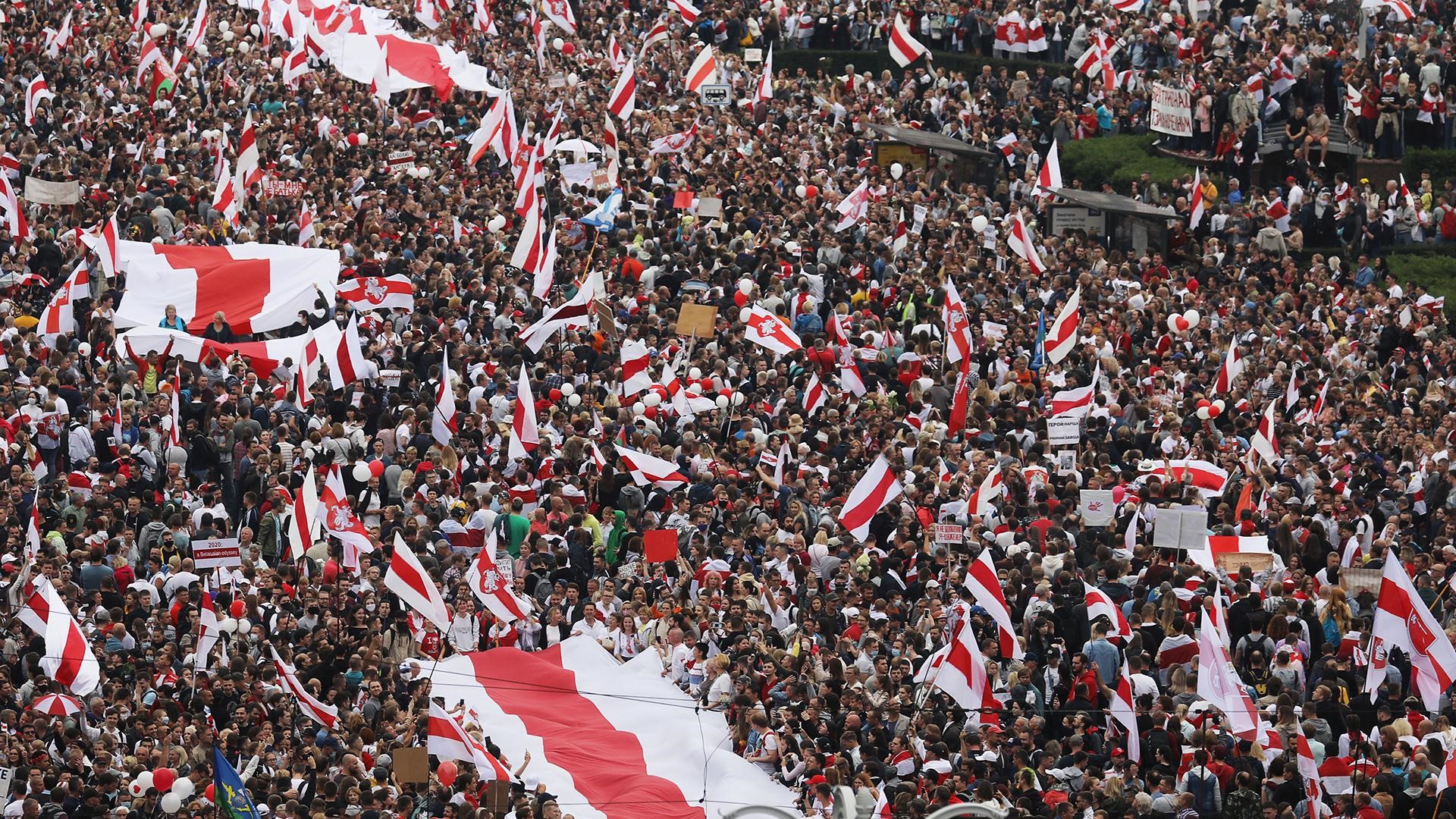 On Sunday January 23 at 3 PM, the New European Ensemble will organize a collaborative online performance with debate center De Rode Hoed in Amsterdam entitled Forgotten Friends – the unfolding drama in Belarus. This online performance will connect the music of four Belarusian composers with current events in the country.

Forgotten Friends – the unfolding drama in Belarus
A look at the current situation in Belarus with Tatsiana Khomich (spokesperson for the Belarusian Democratic Forces), Prof. dr. Ellen Rutten (Slavic Studies, University of Amsterdam) and former Russia correspondents Arnout Brouwers (Volkskrant) and Michel Krielaars (NRC). New European Ensemble presents work by four Belarusian composers in support of the platform #MusicforBelarus, which raises funds for political prisoners and their families in Belarus.

After the Belarusian elections in August 2020, thousands took to the streets to demand an end to President Alexander Lukashenko’s reign dating back to 1994. The regime reacted with dictatorial repression and violence and by incarcerating key opposition figures. The reaction from the country’s Western European neighbors was muted. Continual protests have resulted in greater awareness of the situation. By asking ourselves who our Belarusian neighbors are we can achieve greater engagement with their plight. This event is meant to break through the silence and focus on a country that is both geographically and culturally close to Western Europe.

Journalists, protesters, academics, artists and others who spoke out against the regime have been imprisoned. The Human Rights Foundation has called the actions of the regime a ‘crime against humanity’. The work of many Belarusian artists, composers and musicians has been banned. The New European Ensemble will play works by Oxana Omelchuck, Kanstantin Yaskou, Valery Voronov and Volha Padhajskaja, some of which can no longer be performed in their home country.

The panel will discuss the current situation in Belarus. What is happening locally and internationally? What happened around the refugee crisis at the Polish border and what has the international reaction been to the forced landing of Ryanair flight 4978 in Minsk to arrest journalist Roman Protasevich? What has the impact of Western sanctions against the regime been? What strategies are Belarusian activists and journalists pursuing? What are future scenarios for the country, the regime and more importantly its citizens?

Tatsiana Khomich is spokesperson for the Belarusian Democratic Forces. Her sister Maria Kalesnikava ran in the election against President Lukashenko and was subsequently arrested. Khomich speaks for the Belarusian Democratic Forces and is Coordination Council Representative for political prisoners across Europe and the USA with the goal of drawing attention to the situation in Belarus.

Prof. dr. Ellen Rutten is professor of literature and head of the Slavic Studies group at the University of Amsterdam. She created research projects like Digital Emotions and Literature of the 21st Century at the Amsterdam School for Cultural Analysis. She is editor in chief of the magazine Russian Literature. In her own research she focuses on post-Soviet literature, art, design and social media.

Arnout Brouwers is editor of the opinion section for the Volkskrant. He was the paper’s chief Russia correspondent from 2006-2013. He studied history, American studies and defense studies in Amsterdam, Northampton and Boston. His book Rodina Tussen apathie en revolutie, about Russian culture and politics was published by Atlas Contact in 2018.

Michel Krielaars is editor in chief of books at NRC and writes a weekly column on literature. He was the paper’s Russia correspondent for many years. His own writings include the novels Meeus, En het dansen gaat door and Afkomst, the collection of short stories entitles Vanillevla met frambozen and his non-fiction works Het brilletje van Tsjechov and Reizen door Rusland (Travels in Russia) which won him the prestigious Bob den Uyl Prize in 2015.

This concert will be livestreamed. Order a free ticket for the livestream here.